As part of a Wellcome Trust Secondment Fellowship with the RSPCA's Research Animals Department Dr Rich Gorman has recently started a new research project as part of the Animal Research Nexus, extending our work on how publics and patients have a voice in animal testing to explore the question of alternatives. Particularly, this project is themed around a rather wonderful and enigmatic species... the Atlantic Horseshoe Crab, Limulus Polyphemus...

The Atlantic Horseshoe Crab plays a rather unassuming, yet vital role, in enabling the global safety of vaccines and injectable medicines, as the crab's blood is used to test for the presence of 'endotoxins'.

Endotoxins are bacterial components that can cause fever, inflammation, and even death if they enter the mammalian blood stream. Testing for the presence of endotoxins is thus vital for the safe use of vaccines, injectable medicines, and medical devices in human and veterinary medicine. In North America and Europe, the primary method for endotoxin testing is currently the Limulus Amoebocyte Lysate (LAL) test. This exploits the incredibly efficient abilities of blue-blooded marine horseshoe crabs to pick up endotoxins, linking this immunologically unique and ancient species to the global supply chains of modern health and medicine.

Procuring blood for this (regulatory mandated) testing involves capturing & bleeding ~500,000 crabs from wild populations each year (the exact numbers are contested) as they breed on the shores of the north-eastern USA each spring. This continued use - and rise in use with increasing global demand for vaccines, pharmaceuticals, and medical devices - of horseshoe crabs is prompting growing questions around welfare and sustainability. There are debates around Limulus’ sentience and capacity to suffer, with animal protection groups posing welfare and ethical questions. There are discussions about the impact of capture and bleeding on species health and mortality, with questions about declining populations, coastal ecologies (such as shorebirds reliance on crab populations), and ultimately the sustainability of pharmaceutical supply-chains. The Atlantic horseshoe crab has been classed as 'vulnerable' by the IUCN, with populations trending to 'decreasing'. 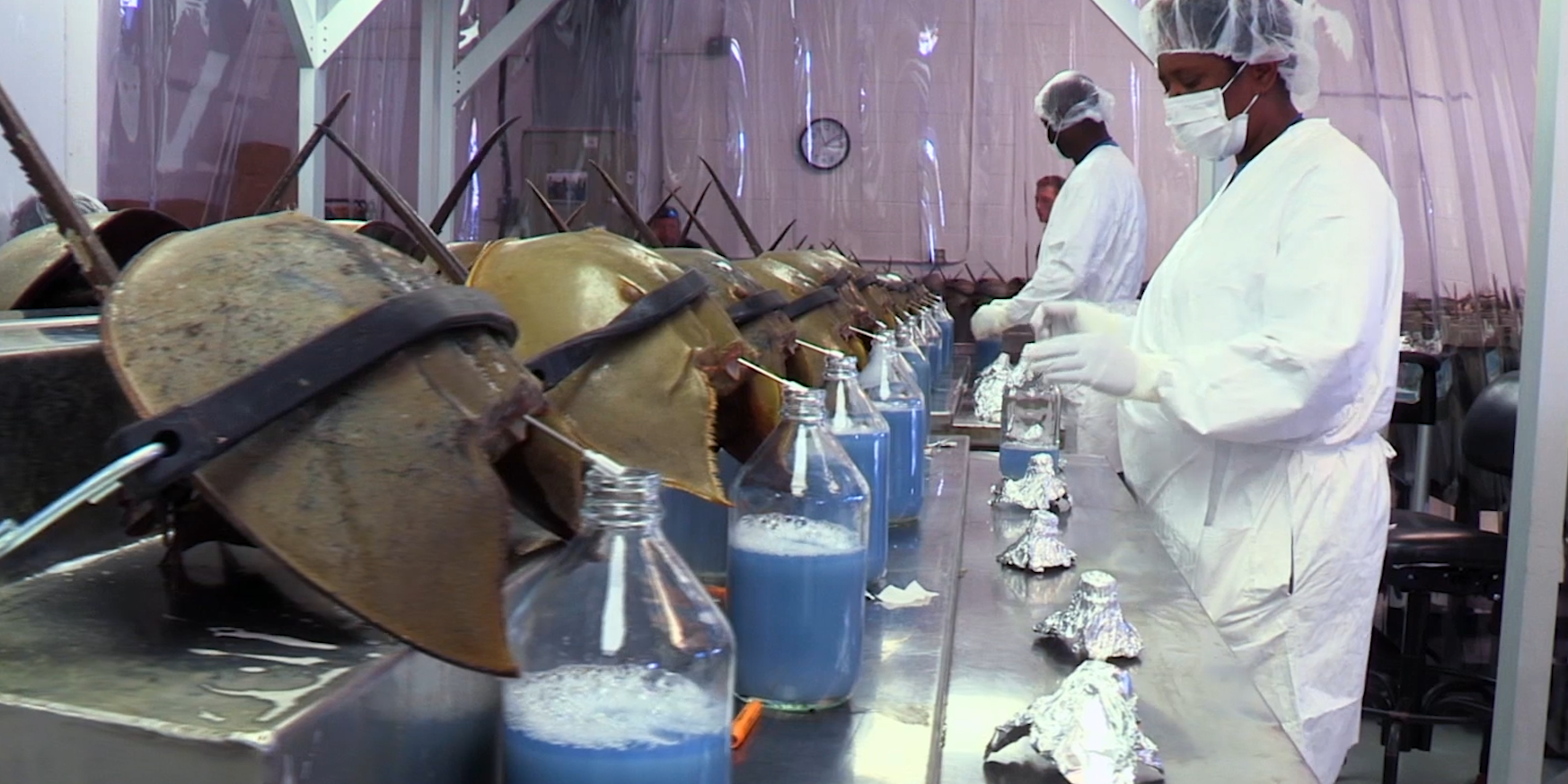 The serious public health concerns posed by endotoxins means debate over the use of horseshoe crabs is growing. However, it involves considerable uncertainties and diverse views. A synthetic substitute has been available since 2003, but uptake has been slow due to the availability of the current test, cautions over the validation of alternatives, and lack of regulatory requirements to consider alternatives to testing in non-vertebrates. More recently, an alternative assay to the LAL test, the recombinant Factor C (rFC) based assay has been gaining attention. One review of this alternative's performance has suggested it is equivalent to, or better than, LAL in terms of its ability to detect and quantifiably measure bacterial endotoxin.  However, others have been less positive about the potential to move to this alternative on a routine or commercial basis, citing concerns about the ability of the alternative to achieve adequate specificity. The topic of alternatives here has generated much discussion, with debates becoming increasingly polarised, and creating something of a 'knowledge controversy'.

To complicate things further - the use of the LAL test is something of an 'alternative' in itself, having mostly replaced the previous method for endotoxin testing, which involved live rabbits.

Despite this lack of consensus, at a recent session of the European Pharmacopoeia (Ph.Eur) Commission, which sets the standards for medicine quality control, the ‘test for bacterial endotoxins using recombinant factor C (rFC)’ was designated as a new general, standalone, test as of the 1st January 2021. Some have suggested that this represents a level of regulatory encouragement in non-animal methods, and is a potentially significant milestone in encouraging the use of a non-animal method of endotoxin testing, and for all those concerned about the animal welfare and environmental impact of the LAL test.

Yet the straightforward replacement of horseshoe crabs is also not one without complex questions and challenges. Rather than being a high-value ‘catch and release’ asset within the biomedical economy, some have suggested that the rise of alternatives may shift the crab’s status as a commodity; as Madrigal comments, “being valuable alive has obviously hurt the horseshoe crab in some ways. But having no economic value at all is worse”.

Identifying a way forward in this knowledge controversy is complex.

This project aims to develop understanding of the use of horseshoe crabs in endotoxin testing as a complex scientific and societal issue, situated at the interface of human, animal, and environmental health. It will compare stakeholder understandings of the relative importance of issues for the future of endotoxin testing, including biomedical risks (around the validation of alternatives), sustainability risks (to pharmaceutical production and species populations), animal welfare risks (in relation to sentience and suffering), commercial risks (around control of and access to animals and alternatives) and ecological risks (in conserving coastal ecologies). Ultimately, my research aims to understand stakeholders’ perceptions of the obstacles & opportunities presented by alternative methods within endotoxin detection, & identify what policy frameworks and evidence might help create sustainable futures for humans and horseshoe crabs alike.