As part of a Wellcome Trust Secondment Fellowship with the RSPCA's Research Animals Department Dr Rich Gorman has spent the first half of 2020 exploring what a social science perspective might add to understanding the debates surrounding the biomedical use of horseshoe crabs. Read on to find out a little more about the results of this exciting research...

The Atlantic horseshoe crab (Limulus Polyphemus) is likely not the first animal that people think of when they think about laboratory animals. Yet these enigmatic invertebrates are intricately entangled with the supply chains of modern health and medicine. Moore (2017: 104) suggests that ‘probably every human since the 1970s has directly or indirectly benefited from horseshoe crab blood’.

Recent weeks have seen a lot of media coverage about horseshoe crabs, and the role they play within contemporary pharmaceutical production, particularly in the context of developing a COVID-19 vaccine. Stories about horseshoe crabs in the press and media generate huge interest, attention, and discussion. The topic is certainly of public interest, and growing.

So why are these strange animals so crucial to the pharmaceutical industry? This all comes down to the problem of bacterial endotoxin detection. Endotoxins are bacterial components that can cause systemic toxicity if they enter the mammalian blood stream. Testing for the presence of endotoxins is vital for the safe use of vaccines, injectable medicines, and medical devices in human and veterinary medicine. Previously, this involved injecting samples into rabbits and measuring any fever-like response. However, pioneering work by Jack Levin and James Cooper throughout the 60's recognised that recognised that the sensitivity of the blood of horseshoe crabs would make a highly applicable method for assaying bacterial endotoxin, with the reaction being able to be adapted to a convenient in vitro test. However, the ‘replacement’ of the Rabbit Pyrogen Test by this Limulus Amebocyte Lysate, or LAL (Limulus here being the horseshoe crab, amebocytes being what is extracted from the crabs, and lysate referencing the manner of production, with the cells being lysed) as the ‘gold-standard’ for endotoxin detection involved a lengthy and complex process. Both regulatory and industry acceptance and adoption was slow, and it wasn't until 1987 that the FDA published final guidance setting forth the official conditions for the use of LAL in lieu of the rabbit test.

Of course, the story doesn't end there. Whilst the introduction of the test based on horseshoe crab blood may have 'saved thousands of rabbits’ lives' (Moore, 2017, 110) as Zhang notes, ‘the LAL test still required the use of animals, but the grisly process of sticking needles into animals became hidden and outsourced to a different part of the supply chain’. LAL exists in the category of what Herrmann and Jayne refer to as ‘alternatives that still exploit animals’. At what point does an alternative stop being an alternative, and simply become the new normal? When are alternatives needed to the alternative?

Procuring blood for LAL testing involves capturing and bleeding over 500,000 crabs from wild populations each year, many of which die. This continued use - and rise in use with increasing global demand for vaccines, pharmaceuticals, and medical devices - of horseshoe crabs is prompting growing questions around welfare and sustainability. There are debates around Limulus’ sentience and capacity to suffer, with animal protection groups posing welfare and ethical questions. There are discussions about the impact of capture and bleeding on species health and mortality, with questions about declining populations, coastal ecologies (such as shorebirds reliance on crab populations), and ultimately the sustainability of pharmaceutical supply-chains. The Atlantic horseshoe crab has been classed as 'vulnerable' by the IUCN, with populations trending to 'decreasing'. However, the extent to which the biomedical use of crabs has an impact here is contested - with a number of additional factors also placing pressure on horseshoe crabs - from their use as bait to catch eel and conch, to the loss of habitat.

My research has involved exploring what a social science perspective might add to understanding the debates surrounding the use of horseshoe crabs in endotoxin testing. It draws on qualitative research with stakeholders, alongside documentary and policy analysis to examine the various perspectives, positions, and sides of debates about horseshoe crabs. 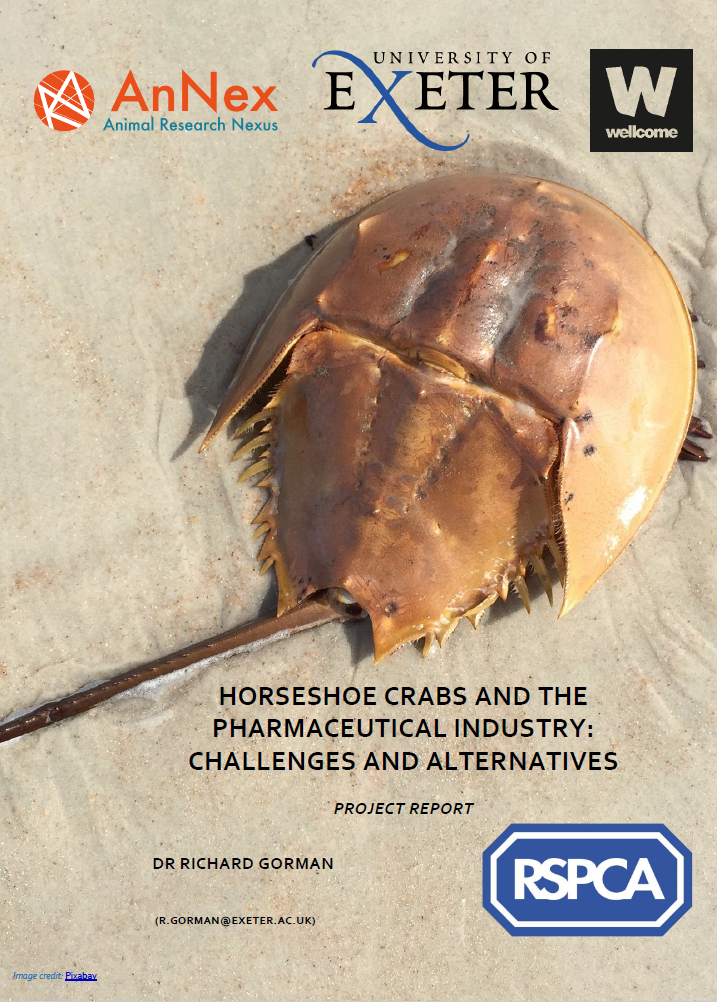 The use of horseshoe crabs in endotoxin testing engages a complex range of stakeholder perspectives and involves multiple ‘epistemic communities’ each with their own shared beliefs, working practices, and criteria for assessing validity that lead them to form different understandings. I wanted to explore the wide diversity of perspectives about the impact that the biomedical industry has, or does not have, on horseshoe crabs, and the debates about whether it's currently possible to replace horseshoe crabs within contemporary pharmaceutical processes.

I wanted to explore what role ideas about animal welfare have played in shaping conversations about horseshoe crabs, examining why the biomedical use of Limulus has remained outside of, and resistant to, an engagement with the welfare concerns that underpin the social acceptability of the biomedical usage of other animals. Horseshoe crabs are a valuable case study to think through how people approach and engage with issues of animal welfare and ethics, as their use doesn’t easily fit into existing ethical frameworks. Thinking about horseshoe crabs as a welfare issue and priority is challenging for multiple compounding reasons. Horseshoe crabs are a wild invertebrate, managed as a fishery, and bled through a process widely imagined as both non-invasive and a force for conservation, in order to produce a reagent that is positioned as an in vivo alternative.

There is a growing interest amongst animal welfare and protection groups and broader publics in campaigning for the humane treatment of crabs, lobsters and other decapod crustaceans (Fiorito et al., 2014). Though technically horseshoe crabs are not ‘true crabs’ (they are instead classed as belonging to the subphylum Xiphosura, an order of arthropods related to arachnids), these campaigns highlight how ideas – and public expectations – around invertebrates are changing. As Gail Davies has discussed in a previous Animal Research Nexus blog, people’s ways of thinking about the ethics of animal care differ dependent on spatial contexts. That is, what publics expect, and think of as acceptable practices, varies according to the imagined spaces in which we place animals. Thus, whilst horseshoe crabs may be sourced via a fishery, their later movement into a laboratory space – for the purposes of producing human health – means that they are associated with an expectation of care and welfare in line with what is extended to other laboratory animals. Public support in utilising animals is conditional, based on the extent to which there are alternatives, the processes through which harms to animals are minimised and the benefits to human (or animal) health maximised (Davies et al., 2016).

As such, I've tried to show how bringing conversations about horseshoe crabs into connection with wider discussions about animal welfare more broadly offers many opportunities for restructuring debates in helpful ways. Particularly here, the 3Rs framework – the ambition to, where possible, replace, reduce, and refine the biomedical use of animals – emerges as a useful and appealing concept to a wide variety of the stakeholders involved in discussions about horseshoe crabs. However, different stakeholders see different value and possibilities in each of the individual ‘Rs’, to the point of substantial friction between those who advocate focus on ‘replacement’ above ‘reduction’. Ideas about replacement have tended to dominate discussions, a focus that has detracted from equally important efforts towards developing alternative approaches involving reduction and refinement. My research attempts to map the exciting efforts emerging to replace, refine, and reduce contemporary biomedical reliance on horseshoe crabs, and  examine current appetites for the broader uptake of these.

Creating more ethical and sustainable futures for humans and horseshoe crabs alike will require changing the shape of existing conversations about horseshoe crabs. The use of existing ethical, regulatory, and conceptual frameworks like the 3Rs offers huge potential to reframe discussions and find ways to talk about the biomedical use of horseshoe crabs that avoid the growing polarisation, whilst introducing a means of extending – and conveying – the welfare considerations that are increasingly expected across science and society.

You can read the full report here. It's intended to be an overview of the topic and is aimed at the multiple stakeholder and public audiences interested in the matter of horseshoe crabs and animal welfare. Additional scientific articles are in development in peer-reviewed academic journals and books, which will expand on the themes identified here.