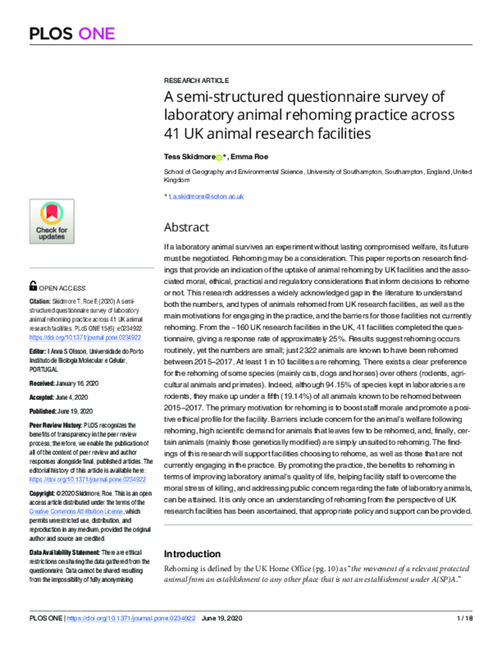 The aim of this paper was to provide an overall picture of current rehoming practice from UK animal research facilities. In the paper, we explore the numbers and species of animals rehomed, the procedures and policies followed to rehome, and the barriers and opportunities posed by the practice.

Results suggest rehoming occurs in approximately 50% of laboratories surveyed, yet numbers rehomed are small; just 2322 animals are known to have been rehomed between 2015-2017. Although rehoming occurs across a range of species, there exists a clear species preference, whereby traditional companion animals (dogs, cats and horses) are more commonly considered. Indeed, although 94.15% of species kept in laboratories are rodents, they make up under a fifth (19.14%) of all animals known to be rehomed.

Facilities reflected that rehoming could boost staff morale, and promote a positive ethical profile of the facility, helping to foster and maintain cultures of care. Barriers included worries over the welfare of rehomed animals, high scientific demand leaving few to be rehomed, and GM animals simply being unsuited to rehoming.

It is hoped that the findings of this research will support facilities choosing to rehome, as well as those that are not currently engaging in the practice.