Animal research nexus: a new approach to the connections between science, health and animal welfare 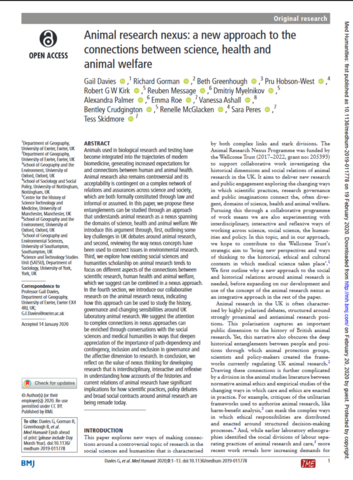 Animals used in biological research and testing have become integrated into the trajectories of modern biomedicine, generating increased expectations for and connections between human and animal health. Animal research also remains controversial and its acceptability is contingent on a complex network of relations and assurances across science and society, which are both formally constituted through law and informal or assumed. In this paper, we propose these entanglements can be studied through an approach that understands animal research as a nexus spanning the domains of science, health and animal welfare. We introduce this argument through, first, outlining some key challenges in UK debates around animal research, and second, reviewing the way nexus concepts have been used to connect issues in environmental research. Third, we explore how existing social sciences and humanities scholarship on animal research tends to focus on different aspects of the connections between scientific research, human health and animal welfare, which we suggest can be combined in a nexus approach. In the fourth section, we introduce our collaborative research on the animal research nexus, indicating how this approach can be used to study the history, governance and changing sensibilities around UK laboratory animal research. We suggest the attention to complex connections in nexus approaches can be enriched through conversations with the social sciences and medical humanities in ways that deepen appreciation of the importance of path-dependency and contingency, inclusion and exclusion in governance and the affective dimension to research. In conclusion, we reflect on the value of nexus thinking for developing research that is interdisciplinary, interactive and reflexive in understanding how accounts of the histories and current relations of animal research have significant implications for how scientific practices, policy debates and broad social contracts around animal research are being remade today.