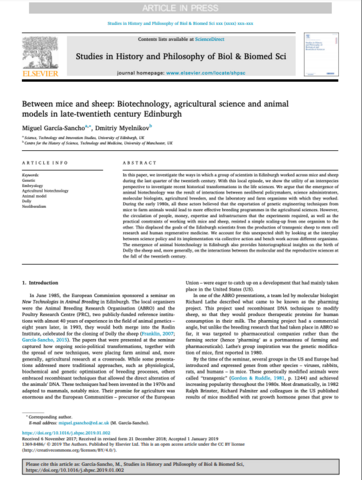 In this paper, we investigate the ways in which a group of scientists in Edinburgh worked across mice and sheep during the last quarter of the twentieth century. With this local episode, we show the utility of an interspecies perspective to investigate recent historical transformations in the life sciences. We argue that the emergence of animal biotechnology was the result of interactions between neoliberal policymakers, science administrators, molecular biologists, agricultural breeders, and the laboratory and farm organisms with which they worked.

During the early 1980s, all these actors believed that the exportation of genetic engineering techniques from mice to farm animals would lead to more effective breeding programmes in the agricultural sciences. However, the circulation of people, money, expertise and infrastructures that the experiments required, as well as the practical constraints of working with mice and sheep, resisted a simple scaling-up from one organism to the other. This displaced the goals of the Edinburgh scientists from the production of transgenic sheep to stem cell research and human regenerative medicine. We account for this unexpected shift by looking at the interplay between science policy and its implementation via collective action and bench work across different organisms.

The emergence of animal biotechnology in Edinburgh also provides historiographical insights on the birth of Dolly the sheep and, more generally, on the interactions between the molecular and the reproductive sciences at the fall of the twentieth century.