Critiquing imaginaries of ‘the public’ in UK dialogue around animal research: Insights from the Mass Observation Project 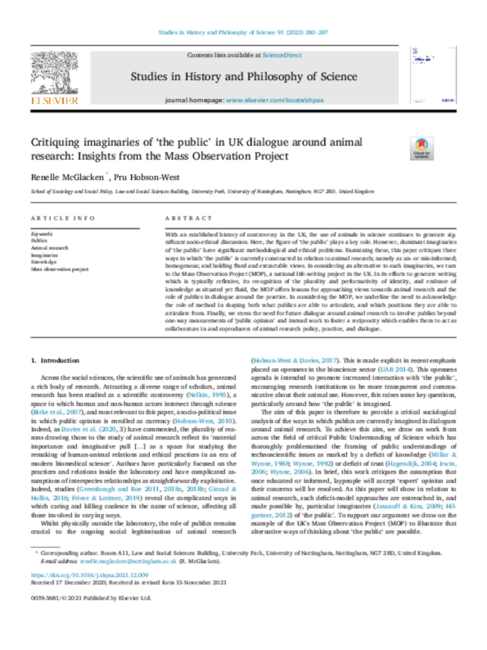 With an established history of controversy in the UK, the use of animals in science continues to generate significant socio-ethical discussion. Here, the figure of ‘the public’ plays a key role. However, dominant imaginaries of ‘the public’ have significant methodological and ethical problems. Examining these, this paper critiques three ways in which ‘the public’ is currently constructed in relation to animal research; namely as un- or mis-informed; homogenous; and holding fixed and extractable views. In considering an alternative to such imaginaries, we turn to the Mass Observation Project (MOP), a national life-writing project in the UK. In its efforts to generate writing which is typically reflexive, its recognition of the plurality and performativity of identity, and embrace of knowledge as situated yet fluid, the MOP offers lessons for approaching views towards animal research and the role of publics in dialogue around the practice. In considering the MOP, we underline the need to acknowledge the role of method in shaping both what publics are able to articulate, and which positions they are able to articulate from. Finally, we stress the need for future dialogue around animal research to involve publics beyond one-way measurements of ‘public opinion’ and instead work to foster a reciprocity which enables them to act as collaborators in and coproducers of animal research policy, practice, and dialogue.