Getting to grips with wildlife research by citizen scientists: What role for regulation? 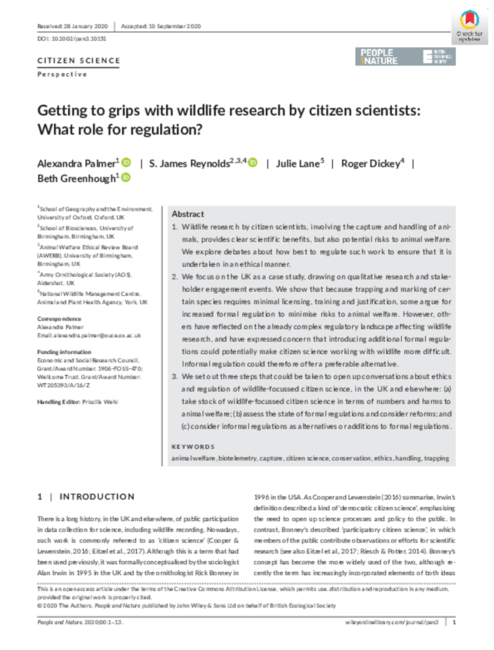 Citizen science involves participation by members of the public in scientific research. In wildlife research, citizen scientists might be involved in the capture and handling of animals (e.g. via trapping, marking, and the use of tracking devices). Such work provides clear scientific benefits. However, it also comes with risks, including those to animal welfare. In this perspective piece we explore current regulations and questions around how best to regulate this work in order to ensure that it is undertaken in an ethical manner. We do this by drawing on qualitative social science research and stakeholder consultation with researchers, citizen scientists, and regulators in the UK.

The trapping and marking of some wildlife species require little licensing, training, and justification in the UK, leading some to argue for increased formal regulation in order to minimise risks to animal welfare. This could take the form of extending the UK’s Animals (Scientific Procedures) Act (A(SP)A) to cover trapping, or overhauling the UK’s complex patchwork of wildlife regulations (as was recommended by the Law Commission). However, others have expressed concern that introducing additional formal regulations could make wildlife-focussed citizen science more difficult. For example, individuals not affiliated with research universities or government departments described finding it hard to secure A(SP)A licences due to the cost, expertise, and time required. Informal regulations could therefore be considered as alternatives or supplements to formal regulations. These could take the form of, for example, sector-wide standards disseminated through best practice guidelines and training resources, or participatory approaches that direct citizen scientists towards a process rather than a result.