Horseshoe Crab Use in Biomedical Research 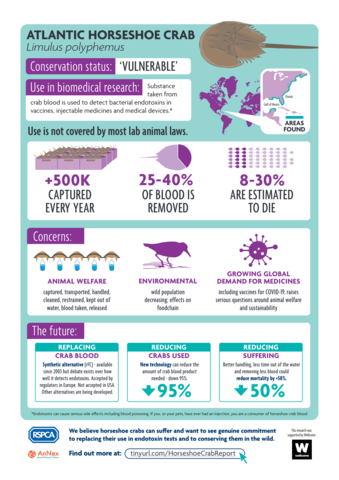 The Atlantic horseshoe crab (Limulus Polyphemus) has been classed as 'vulnerable' by the IUCN, with populations trending to 'decreasing'. These invertebrates that dwell off the coast of the eastern USA are likely not the first animal that people think of when they think about health and wellbeing, yet this species is intricately entangled with the supply chains of modern health and medicine.

Why are these strange animals so crucial to the pharmaceutical industry? This all comes down to the problem of bacterial endotoxin detection. Endotoxins are bacterial components that can cause systemic toxicity if they enter the mammalian blood stream. Testing for the presence of endotoxins is vital for the safe use of vaccines, injectable medicines, and medical devices in human and veterinary medicine. That means that if you, or your pets, have ever had an injection, you are a consumer of horseshoe crab blood.

In North America and Europe the primary method for endotoxin testing is the Limulus Amebocyte Lysate (LAL) test. This utilises the coagulative properties of Atlantic horseshoe crab (Limulus polyphemus) blood to detect endotoxins, linking this immunologically unique and ancient species to the global supply chains of modern health and medicine. Procuring blood for LAL testing involves capturing and bleeding over 500,000 crabs from wild populations each year, many of which die. Estimates of mortality rates vary between 8% and 30%. This continued use - and rise in use with increasing global demand for vaccines, pharmaceuticals, and medical devices - of horseshoe crabs is prompting growing questions around welfare and sustainability. There are debates around Limulus’ sentience and capacity to suffer, with animal protection groups posing welfare and ethical questions. There are discussions about the impact of capture and bleeding on species health and mortality, with questions about declining populations, coastal ecologies (such as shorebirds reliance on crab populations), and ultimately the sustainability of pharmaceutical supply-chains.

However, there are hopeful futures that it may be possible to replace the use of crab blood and/or reduce the number of crabs used. A synthetic substitute to horseshoe crab blood was introduced in 2001 – laboratory-synthesized genetically engineered recombinant factor C – however regulatory approval has been slow to emerge. In the European Pharmacopoeia, the animal-free replacement to crab-blood derived testing achieved regulatory approval at the end of 2019, to come into effect January 2021. However, there is still a long road for the alternative to gain industry confidence and uptake. The United States Pharmacopoeia (USP) on the other hand had similarly proposed the inclusion of recombinant factors for endotoxin testing which would have likewise given rFC equal status. However, in May 2020 the USP announced that they had ‘decided to cancel this proposal and start the development of a separate chapter that expands on the use, validation, and comparability of endotoxin tests based on recombinantly derived reagents’ - a decision that sparked an outpouring of attention and criticism in popular media.

There is also huge scope – though presently, little awareness – for end-users in laboratories around the globe to significantly reduce the amount of crab blood used. For example, AstraZeneca’s 2018 Sustainability report describes how as part of their ‘Culture of Care’ and focus on high standards of animal welfare they were keen to reduce the use of horseshoe crabs in testing, and have invested in new technology ‘which will see a reduction in annual lysate (crab blood reagent) consumption from approximately 7.5 litres to just a few hundred millilitres’.

Finally, it has also been suggested that ‘improved harvest practices have the potential to reduce mortality rates during biomedical harvest by more than half'. This might involve reducing suffering through better handling, keeping the crabs out of the water for shorter periods of time, or even removing less blood.

We believe horseshoe crabs can suffer and want to see genuine commitment to replacing their use in endotoxin tests and to conserving them in the wild.

If you want to find out more about the use of horseshoe crabs, and how this might be reduced, you can read our report here.